A crystal clear blue sky presented itself yesterday, begging a vantage from some high point. Forgoing my original plan of an easy lakeside stroll, I headed up to the nearest and highest trailhead around – Artist’s Point. This remarkable spot is typically plowed open by early summer, though some years it remains completely buried.

For many folks, this is a destination in and of itself and understandably so. You clearly don’t have to go far to enjoy spectacular views. Summer sledding on consolidated sun-cupped snow is just not my thing, however. Perhaps it is an inherent lack of cushioning to my tailbone.

Mostly though, there is this burning desire to explore the alpine. After clambering out of the initial snow-bowl, the summer trail appeared. The snow was far from gone however and probably out numbered melted out parts 3:1 in toto.

That’s alright, though, by this time in the year there is next to zero avalanche risk thanks to how settle it all is. The biggest trouble might be stepping through the surface into a hollow void underneath, but that usually just means up to the shin.

The only other humans I encountered the entire day were three half-naked skiers returning from their hard-earned but highly rewarding turns. Fine by me, as I do enjoy the solitude and feel far from lonely amongst such grandeur! 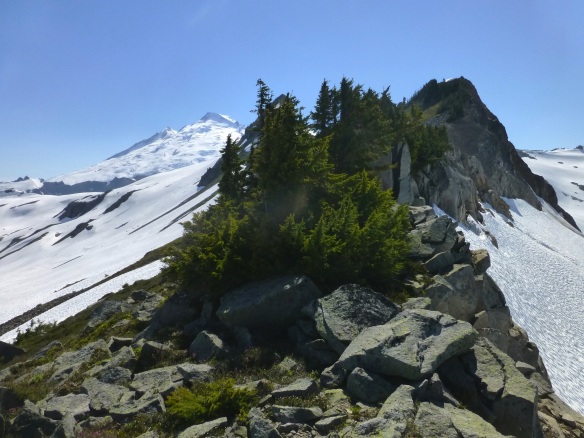 For me, summer snow travel means a slower ascent, especially on a steep sidehill. But can be a fun and quick descent whether it be plunge-stepping, glissading, or just kind of trekking pole jogging/boot-skiing.

The pups and I found the perfect high point destination for 360˚ expansiveness.

Closer to Mt. Baker now than Mt. Shuksan – the two towers of this area.

In places it looks like summer, even though winter is still hanging around.

Once again…the trio in their element! 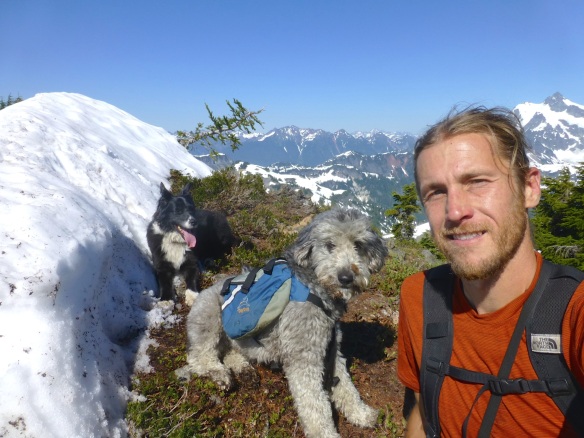