My step-dad, Mark, has filled his retirement with the study of photography and has taken several trips to document wild places. He has become proficient at creating images that inspire, awe, and awaken. The following are his reflections on a recent trip to dramatic Iceland.

I recently took a photography tour of Iceland led by Mark Rasmussen of LightChase Photography. The eight in our party were wonderfully lucky with light and weather. Not that the weather or light was always good (it wasn’t), but the tour leader was often able to put us in the best place to take advantage of the light and weather we had.

The sky before dawn in Rif did not seem promising, for instance, but we checked a couple of possible locations before we found an inlet we could align with a hole in the clouds. The wind was fierce as we stood in the pre-dawn darkness, holding tightly to our tripods. The sun rose, as we had hoped and planned, in the opening in the clouds, reflecting the sunrise colors in the frozen water.

Many family farms have their own church; my understanding is that the minister makes a circuit, offering a small service at each of the churches s/he visits. Upon our inquiry, this family graciously agreed to let us photograph their church, including the inside. 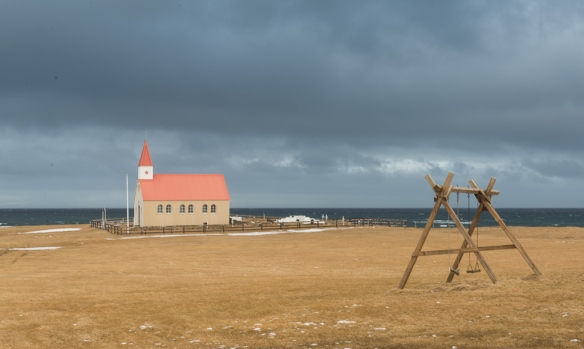 One day, after a long drive to the southeast coast, we walked out to the edge of the Svinaefellsjokull glacier. We had planned to drive further, intending to catch a sunset at a different location, but the light on the glacier and the sky were perfect so we stayed for sunset at the glacier.

We spent three days along the southeast coast. At Jokulsarlon, a glacier calves icebergs into a lagoon. The lagoon is connected to the ocean by a channel about 300 yards long. At high tide the current in the channel moves swiftly into the lagoon, piling up the icebergs in the lagoon. When the tide changes so too does the current, moving the icebergs into the ocean where they are beaten back on to the black sand beach by the strong wind and heavy surf. We photographed in rain and high wind, with the clouds parting from time to time and us taking advantage of the openings in the weather. 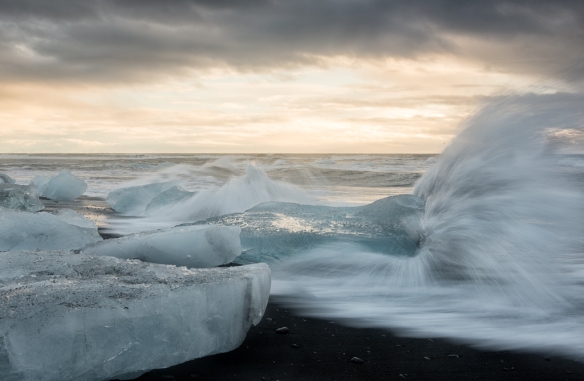 When we visited Vestvhorn Mt, with it’s black sand dunes in the foreground, the clouds once again opened up for us long enough to photograph while we held tightly to our tripods in the strong wind. 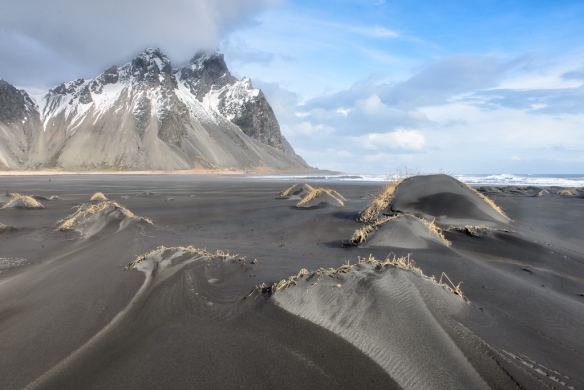 We did have some mishaps. Two in our party of eight briefly walked away from their tripods while we were photographing the aurora and suffered the consequences. When the first fellow’s tripod was knocked over by the powerful wind, his camera and lens were destroyed. The same happened to a second person on a different night, but he was lucky to incur only damage to a filter holder mounted on the front of the lens.

Our greatest good luck occurred while we were at the geyser, Stokkur. Having photographed the geyser in the late afternoon, we were in the restaurant finishing our dinner and waiting for the darkness to get complete when the waiter and about six others rushed outside. The northern lights were visible and had started early, a sign of a strong display of northern lights. We paid our bill in a great rush and full of excitement; we photographed the aurora that night from 8:30 pm until 3:30 am. We learned later that the Icelandic Meteorological Service reported it to be the strongest, most intense, and most widespread display of the aurora borealis in seven years.

I think “good fortune” on this trip meant being out there in the most likely places we could find, ready to take advantage of opportunities that became apparent.

A complete gallery of pictures from this trip and more can be found at: Mark Gromko – SmugMug