A few years ago now, I was on an extended backpacking trip; easily a top ten all time for me. We stayed five days in the aptly named “Enchantments” here in Washington State. My spirit soaring, we covered a lot of other-worldly ground in that time, but it wasn’t particularly grueling, nor was it particularly hot. By the end, however, I was kind of a wreck. 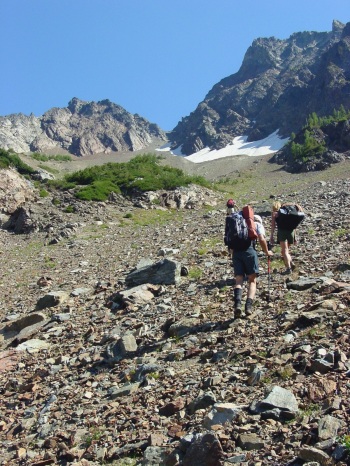 No amount of water could quench my thirst and it seemed as if every joint in my body ached. My head hurt and I felt sluggish. Maybe, snailish even. When we finally got to town I ran to the nearest gas station and guzzled one of those ubiquitous colorful drinks that is supposed to rehydrate. It did, I suppose, but then I kind of needed some insulin to go with it.

Rewind to 20 years ago where at only 18 years old I upset several doctors with borderline high blood pressure. Here I was a svelte athlete non-smoker who seemed laid back.

Their answer: cut your salt intake.

So, I did. For a long time. That is until recently. You see our bodies are 70% water (not unike the earth) and in case you haven’t noticed those fluids have a high inherent salinity. Even our bones are 22% water! Some say it is the same salinity as the ocean and ideally has the same mineral levels as well. Salt is actually just dried ocean. Pure salt is nourishing; full of electrolytes.

Modern salt, while good at intensifying the flavor of your food is actually pretty poor when it comes to giving the body what it needs. This salt is 98% sodium chloride and 1% iodine, and also includes “flow agents” (Think Morton’s add “when it rains, it pours”), aluminum, and other toxins.

So, you’re thirsty. And your blood pressure goes up because heart and arteries need to work harder.

What those docs didn’t tell me is that I had alternatives. And yummy ones too.

Throughout history salt was used as currency. It has the same root as “salary” after all. So, it must have been pretty valuable, right?

Pure ocean or salt spring salt is ideally dried by the sun. Not at the conventional 1200 degrees Fahrenheit that destroys structure. Celtic sea salt or himalayan pink salt has 60-80 trace minerals in bioavailable forms that the body craves, especially when stressed physically or otherwise. Minerals that are depleted in most of today’s soils; our veggies ain’t what they used to be!

I now frequently add a dash of himalayan pink salt to my water bottle and a wedge of lime and find I am way more hydrated. When backpacking I will carry a small container and just  sample it now and then when straight water just doesn’t seem to be doing the trick.